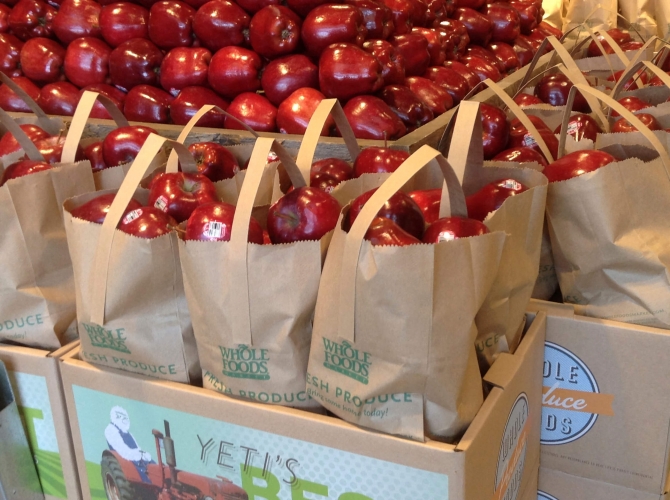 In most grocery stores, produce is a critical part of the entry experience. It’s the first major merchandising center the consumer encounters on entering the store – continuing the football metaphor, it’s “first and ten” for consumers anticipating a positive produce shopping experience. “72% of shoppers choose their grocery store based on the quality of the produce aisle,” according to HarvestMart Insights, a consultancy that provides fact driven analysis to clients in the fresh produce supply chain. “Shoppers spend a third more in the produce department when they’re delighted by the quality and freshness of fresh items.” Produce delight is a cornerstone Home-Toter® attribute – in fact, if there weren’t so many other HomeToter® benefits, attracting shoppers to produce displays that emulate the experience of buying produce fresh-from-the-farm might be enough to tip a retail chain’s purchase decision in PCI’s favor. But that’s not enough.

Whether large store or small, the produce manager’s objective is the same: to motivate shoppers to buy more produce, and in the long run, to help increase the appeal of the produce department as a consumer preference destination. Promising to increase sales is bold. And PCI’s claim that additional revenue can be mined from a store’s produce department by building a display around Home-Toters® is not only bold, but realistic. Every produce manager would love to capture those extra dollars that otherwise are walking out the door. The company does not make this claim lightly. PCI has 66 years of experience to fall back on – overwhelming testimony from produce managers that when they get serious about adding PCI HomeToters® to their displays – and work the program as designed, sale of the items packed in PCI’s HomeToters® increases markedly and immediately, whether potatoes or peaches. Package Containers cut its teeth helping sell a whole lot more ripe bananas for its grocery customers, the kind perfect for making banana pudding, banana bread, etc., and dramatically reduced banana shrink. And now PCI has high performance data to go with their high performance stories.

“Earlier this year we conducted a couple of eye-opening, concept confirming tests,” PCI’s director of marketing and sales, Scott Koppang, says, “one short- and one long-term. The short-term test saw a dramatic increase in the sale of peaches over one day in a single Nebraska store — 100 Home-Toters® filled with 6½ pounds of peaches sold in only six hours, producing $1,240 in revenue on just a $15 investment. A six-week test in a 79 store Texas chain, in cooperation with the National Onion Association and United States Potato Board, also in 2013, also yielded significant gains: a category sales increase of $166 per week per store on less than a $20 Home-Toters® investment – more than an 800% increase in gross revenue! “Our challenge to grocery executives and produce managers across North America is this,” says “Coach” Koppang, the man most responsible for PCI’s marketing and sales game plan: “Give our Triple-Threat Home-Toters® performance promise a tryout on your produce team, where it can make a real ‘first-andten’ difference — in the produce department. “That’s the name of our game – and that’s our promise to you.”

Package Containers is North America’s leading provider of high performance paper totes, poly bags and wire ties for grocer, grower, food service and specialty retail customers. Our Home-Toter® brand produce merchandising containers are known for their proven ability to prompt consumer purchase and increase produce revenue. PCI also is a premier source of innovative merchandising concepts to build produce brands. The company was founded in 1947 in Portland, Oregon and is locally owned. Its manufacturing plant and headquarters remain in nearby Canby today, with sales offices in California, Ohio, Texas and Illinois. Package Containers also is known for its recyclable / compostable / reusable products and innovative green manufacturing processes. The company and its management readily acknowledge their dependence on PCI’s employees, customers, suppliers, local communities and other key stakeholders for its continuing success.

CMI is kicking off its Kiku program. The company will begin shipping this week… Read More